Understanding (And Countering) The Cost of Downtime

When technology crashes, it brings businesses down with it. Treating systemic errors with priority or preventing them from happening are great methods to minimize your business’ losses to downtime. While you can start investing in network and server monitoring, it’s also important to understand how we became so reliant on this technology and the cost of downtime.

Why Do Outages Happen?

On average, majority of businesses need more than one hour to revive a crashed application. It usually costs over $10,000 for each hour of downtime. More specifically, power outages in the nationwide electric grid cost Americans $150 billion annually. This fizzles down to approximately $500 per citizen.

In 2019, a car collision led Google Maps to reroute cars heading to the Denver Airport. This backfired as it led nearly 100 drivers through a muddy field, ultimately creating a second traffic jam.

Technology has even normalized its presence in our most personal spaces: the home. Common residential technology includes security systems such as alarms, entertainment resources like radios, televisions, and video game consoles, smart home gadgets, mobile tablets and devices, and even typical appliances like dishwashers, stoves, and laundry machines. 70% of loT devices are B2B related — contributing a major effect on businesses. This puts companies at risk of compromise for their websites and emails, intranet and servers, and operational infrastructure.

More specifically, we rely on technology because computers are designed to perform repetitive, routine tasks humans are quickly bored by. However, our technology is swiftly adopting. Recent advancements have given computers human-like ability to detect patterns, recognize the language, and even spark creativity.

Our Tech Is Starting To Outsmart Us 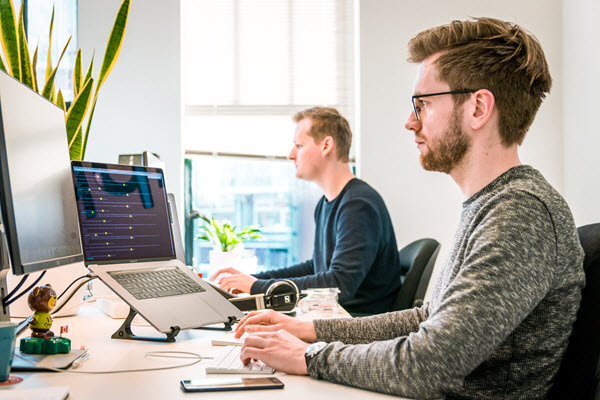 Actually, computers have been beating us at our own games for decades. In 1962, checkers master Robert Nealey lost a match against a computer. Deep Blue, IBM’s computed chess game capable of calculating 200 million possibilities per second, won a match against world champion Garry Kasparov in 1997. IBM’s Watson computer defeated 74-time Jeopardy! Winner Ken Jenning in 2011. His remarks: “I, for one, welcome our new computer overlords.”

Although computers have an impressive track record, how exactly does a CPU measure up to the human brain?

In the words of Avivah Litan, Vice President and Analyst at Gartner Research, “The problem is [that] humans can’t keep up with all the technology they have created. It’s becoming unmanageable by the human brain. Our best hope may be that computers will eventually become smart enough to maintain themselves.”

As the human brain develops, we face challenges with recalling information, multi-tasking, and focusing attention as parts of the brain shrink. It ultimately affects learning and complex thoughts. Neural activity and blood flow also decrease with age while inflammation increases.

On the other hand, an aging CPU faces hard drive failure, low-memory problems, and slower systems. New software updates demand more resources which older devices do not have access to. Apple has even been exposed for slowing down older phones to prevent overtaxing the battery.

At the rate of our technology use, securing your technology with system monitoring is more important than ever. There is a hacker attack every 39 seconds, but only 1 in 4 global organizations feel prepared to handle these attacks. As a result, 95% of cyber security breaches are the result of human error.

The solution is for small businesses to utilize a monitoring system that is accessible and affordable. Maintain your mechanical health and minimize your cost of downtime by running monitoring software and cyber security solutions.

The post Understanding (And Countering) The Cost of Downtime appeared first on Dumb Little Man.

How to Take A Break: 5 Simple Tips To Your Success

THIS product has changed my nightly routine!